Your Handy Guide To The EU Settlement Scheme As Brexit looms ahead, many aspects of the situation remain unresolved, making it hard to predict what the future looks like. One particularly pressing issue has been the rights of UK nationals in Europe and EU nationals in the UK, the latter of which amounts to over 3 million people.

We understand many of our Flexers are EU nationals, so we’ve decided to post this blog to help you navigate the information related to your rights.

If you’re from the EU and based in the UK, you may be curious and even concerned about how you’ll be affected, including the rights you’ll have, whether you can stay and how to guarantee your residency. According to the government, EU citizens will now need to apply to a settlement scheme if they wish to remain in the UK as living and working citizen. It will also protect the rights you currently have, such as access to healthcare, benefits and the pension scheme.

The application process is currently open and has a deadline of 30th June 2021, or 31st December 2020 if the UK leaves the EU without a deal. Don’t leave it until the last minute; we suggest you continue reading, prepare your application soon and have peace of mind.

For EU citizens who wish to stay in the UK in the long-term, it is essential to apply for settled status. This applies to people who have:

According to a guide published by the Home Office, you do not need to apply to the scheme if you are:

If you’re eligible to apply for the settlement scheme, successful applicants will be given either:

Each status depends on how long the applicant has been living in the UK, with different rights on being a short-term or long-term citizen. 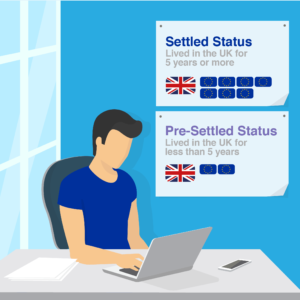 Pre-settled status refers to people who have been living in the UK for up to five years, but after applying, will be permitted to remain in the country until that time has come to an end. After this time, they will then need to apply for settled status for long-term residency.

In case of a no-deal Brexit, EU citizens who move to the UK will be able to apply for European Temporary Leave to Remain (Euro TLR), a 3 year temporary immigration status. You will have to apply to the new Euro TLR scheme after arriving in the UK and it’s free to apply to.

From 1st January 2021, as per post-Brexit government plans, EU workers will have to apply to an Australian-style points-based system. The exact details of the system are currently unclear but are due to be clarified before its introduction. Additionally, from the start of January, visitors from the EU, EEA or Switzerland will be able to come to the UK for 6 months, including tourists and business visitors. Applications can be made quickly and easily online or via an app to reduce the large amounts of paperwork. From October 2019, the ‘EU Exit: ID Document Check’ app is now available to complete on iPhone devices, from the 7 models upwards.

Applicants will need to have:

Don’t worry, it’s free! The previous cost was £65 for adults and £32.50 for children, but the government has scrapped these fees earlier in the year, helping to ease you through the process.

How long does it take?

Ministers have stated applicants should hear back in no more than two weeks after submission, however, there is a debate as to whether this swift turnaround time is realistic due to the sheer volume of applications. We suggest you apply as early as possible. In October 2019, it was announced that there had been 2 million settled status applications to date, with 1,500,000  granted the status up to the end of September 2019.

What happens if my application gets rejected?

Each case will be independently assessed, however, those with repeated or serious criminal convictions are likely to be instantly rejected. The government has claimed that for those who believe they have been rejected unlawfully, there is a 28-day period after the date of the decision to appeal their case.

Where can I find more information?

The scheme may be liable to change as the situation develops. We suggest you bookmark the official guide and stay tuned for any new updates. If you need help as it stands, we recommend you visit the ‘Get help’ section of the government’s site.